skip to main | skip to sidebar
The true harvest of life is intangible...it is in the tints of the morning and evening...it is in the stardust caught...a segment of the rainbow.
Henry David Thoreau 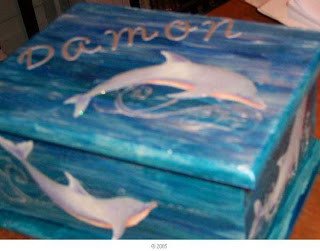 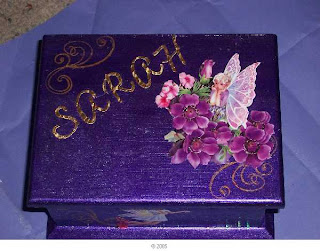 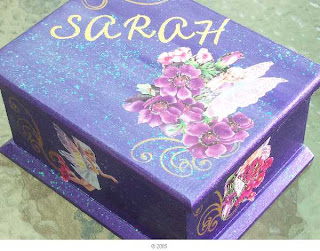 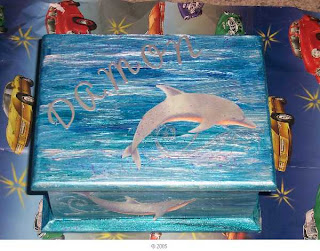 On the weekend, two of my little grandchildren had their birthdays so I made each of them a "Treasure Box". They were both thrilled with them and managed to find lots of treasures to put in them right away. I also have a collection of beautiful shells, so I let them choose some of my shells to put in their boxes as well. Here are some pics, not great ones as I didn't think to take pics under ideal conditions.
Posted by CreativSpirit at 21:25 2 comments:

GIVING BACK BY JESSICA WESOLEK

"Giving Back . . .
Communication fascinates me and always has. I really think it makes the world go around. So, it has always interested me that only 1 or 2 percent of readers ever leave Comments on a blog post, or have anything to say in a Yahoo Group.

It interested me enough that I have been asking friends why that is. Yes, I have a lot of lurker friends to ask. The answers were really interesting because they went something like this: I’m shy, nothing I say would be interesting to anybody, I’m probably the only one who hasn’t already thought of this, I’m too busy.

Do you pick up a theme there? Pretty one-sided, right? But what if leaving comments wasn’t all about you?

I have an interesting lesson to share. I used to have a very hard time accepting compliments, and like many of us do, I would pretty much throw the compliment back in the complimentor’s face, thinking I was practicing modesty instead of insult. They would say “you’re so good” and I would say “no I’m not”. Those are paraphrases, but you know what I mean. “What a pretty dress!” “Oh, this old thing?”

So one day, my brother asked me if I realized that I was insulting the other person. Whether I realized the complimenting process wasn’t only about me, but rather, a social interaction. What? Something that’s not only about me? How could that be?

But he was right. By arguing with a compliment, I was telling the other person they were wrong, and maybe their opinion didn’t matter much to me.
That was a big lesson, and ever after, I just say “Thank you”

There are lots of things that aren’t just about us, and the amazing plethora of treasure that is internet content is one - a gift that didn’t just get stuck in your computer with the hard drive. It is created and given by hardworking and generous-to-a-fault people just like you (blogs, Yahoo Groups, online zines, tutorials, product reviews, etc. - all free).

Well, the web is not different than the world we live in anymore. It is a social place, and we must all take some social responsibility. I get a kick out of articles that talk about “Netiquette” and Web Etiquette. They mention not flaming somebody into ash, and not TYPING IN ALL CAPS because it means you are yelling.

But they don’t say: speak up and add your voice and your energy to this fantastic exchange so it can keep on rolling and become even better. So the folks who are giving all this don’t run out of gas and stall altogether. They should say that.

And just in case you are thinking this is all about me (LOL), I think we do better here than most with Comments (especially when something free is being given away ;-), and I get so much gratitude in emails that it gives me lots of practice on my compliment Thank You’s! But it breaks my heart to see really good Yahoo Groups fade away because only three people are willing to keep talking, or wonderful blogs go away because the author feels she is hearing the sound of one hand clapping or worse, talking to herself in public.

I know lots of bloggers will say they are doing it “for themselves” and it doesn’t matter if anybody responds with a Comment, but a part of that is just bravado. If they were only doing it for themselves, they would do it in a closet - not on the internet.

So let these wonderful folks know you visited, and if you liked their tutorial, or if their technique gave you a valuable answer you’ve been searching for. Or just say “thanks for all you do,” like many of my wonderful readers do. It’s little but it goes a long way.

Give back - and it will only get better for everyone."

Posted by CreativSpirit at 21:00 4 comments: 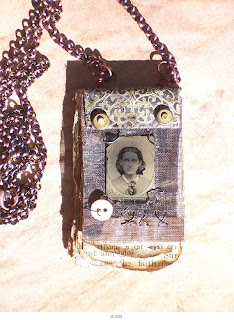 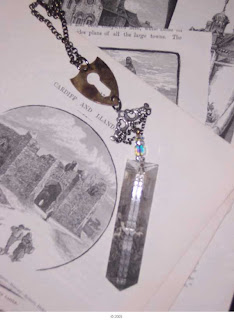 Our tutor for the long weekend Art Retreat was the gorgeous Jenny Crossley. Her classes were wonderful and we had such a fun weekend with her at Yarramalong. There was a very creative class on Saturday doing a fabbo book, but unfortunately due to my ongoing sight issues, I wasn't able to take on this project which did take 10+ hours to complete. BUT I did do both of the etching/pendant classes which were just gorgeous and I can definitely see that I will include this type of creativity in my future.....weeeeeelllll perhaps you might say that one could become addicted.

Thanks to Jenny, Ruth Spitzer and Margaret Weiss for all the wonderful organisation and inspiration over the weekend, also to Ruth for a great class on Saturday night and to Martina for the great Polished Pigments demonstration with which we all had fun and great results....I think there may have been a few orders placed for them after the weekend. To all of the girls who attended, what a great weekend full of comaraderie and artistic accomplishment. Above are two of the pendants which we made on the weekend.
Posted by CreativSpirit at 07:05 6 comments:

MY CANVAS FOR OUR HOSTESS 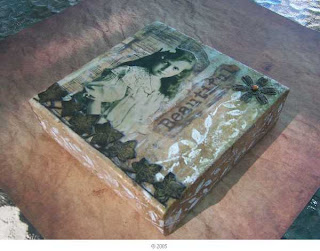 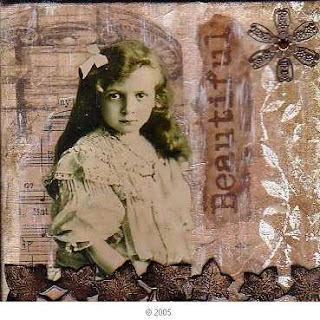 As a gift for our very generous hostess Margaret at the Art Retreat, we all made canvasses of similar size and colour and presented them too her at the end of the weekend. The idea came from the new Apprentice magazine which there were a series of small canvasses all mounted in a large frame, it is a great idea and looks wonderful, so we will all be looking forward to seeing what Margaret does with them.
Above is the canvas I made.
Posted by CreativSpirit at 06:58 2 comments: 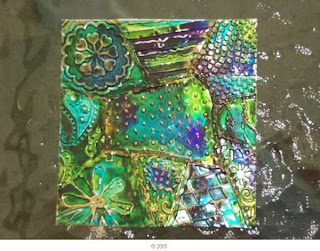 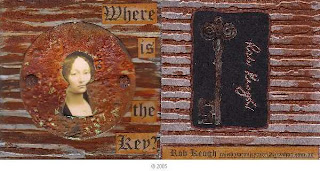 This page (front and back) and the cover were made for a Chunky Books Swap which was organised with the girls who were attending an Art Retreat at Margaret's beautiful property at Yarramalong last weekend. There were 12 of us in the swap and we risisted the temptation of checking out each others pages until the last day of the retreat, when we all sat around Margarets huge dining table and swapped our pages, then we bound them all with a couple of Zutter binders which were brought along for this purpose.
So this was a lovely extra bonus on the weekend, all of the pages are just gorgeous. We also made our own book covers in the Metallica theme. I chose Rusty for my pages which I was very happy with, then I did a colourful metallic cover. Hope you enjoy them.
Posted by CreativSpirit at 06:44 2 comments: 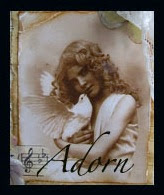 To be notified when I upload new projects...

CreativSpirit
Australia
Being creative has been a big part of my life for as long as I can remember, it is food for my spirit. I am never happier than when I am thinking about my next creation, working on it and getting lost in the creative process, through to the joy of being happy with the completed piece of art. I have been engrossed with so many different media, each one adding another dimension to my life and my art. I really love to try anything new that sparks my interest. When I can't make art, I am constantly thinking about it, I just need to be better at tearing myself away from the everyday, to lose myself in my studio, BUT I'M WORKING ON IT!! I feel so blessed by the wonderful friends that I have made through my art, they do so much to sustain me every day. I live on a beautiful 5 acre property in the mountains on the Mid North Coast of New South Wales, Australia. 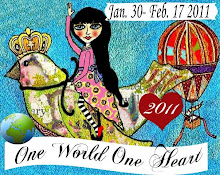 Look who comes for breakfast 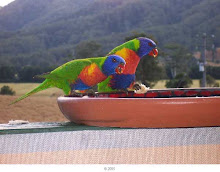 Down in the back corner of my garden 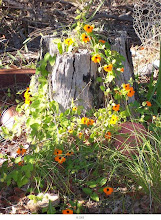 Your fairy is called Fire Rainbowglow
She is a fortune bringer.
She lives where fireflies mate and breed.
She is only seen in the light of a full moon.
Her dresses glow with fiery colours. She has multicoloured wings like a butterfly.
Get your free fairy name here!

The true harvest of life is intangible...it is in the tints of the morning and evening...it is in the stardust caught...a segment of the rainbow.
Henry David Thoreau